Have you ever had an excruciating pain rip through your mouth, as you eat, drink, talk, even; when you’re doing nothing at all! No? Well, those of us who have ever suffered a tooth ache or a tooth cavity can relate. I am sure this deep nagging pain can render one speechless, confused and helpless. However did you know that long ago the tooth worm was believed to be the cause of tooth aches and tooth decay? The tooth worm was an idea that persisted for thousands of years, with historical sightings dating back to 5000 B.C (in a Sumerian text), noted in ancient Chinese scripts of 1500 B.C, in writings of ancient Greek philosophers and poets, among the people of the Roman Empire and Germany in the middle age, even noted on a papyrus from the 20th dynasty of Egypt.

Nobody knew what they actually looked like. You see, they varied among different people; to the British they resembled an eel, to the Germans, they were maggot-like; colored maggot-like creatures to be exact. For the people of the past, these little beasts were to blame for the unbearable pain and discomfort of tooth aches and cavities. These tiny monsters, about the size of your palm were believed to be hiding beneath the surface of the gums. Doing what? Well, causing havoc by boring holes in teeth. They were said to cause cavities and their movement resulted in tooth aches. Only until it stopped moving would the pain subside. Imagine that! A small monster in the mouth whose movements where powerful enough to leave a man numb. The treatment for these tiny devils wasn’t the same. In Medieval England they were treated with the fumes of burned poisonous henbane seeds, some places used magic to cast the demonic worm out of the gums, still, in other places honey was used to lure the worm to the surface and only when the case was severe was the tooth extracted.

Not until the 1900s did the doctors rule out the tooth worm as the cause of tooth decay, and scientifically recognized the ideology of bacteria. Scientists discovered bacterial acids would dissolve the enamel, dentin and cementum causing permanent damage to the tooth that would appear as cavities. Cavities leave the sensitive part of the tooth; containing the nerve, vulnerable to irritation, which causes pain. Simple prevention methods like; brushing teeth twice a day with fluoride containing tooth paste preferably after every meal, cleaning your teeth with dental floss and of course regular dental checkups have been encouraged and are still being encouraged to prevent tooth aches and tooth decay.

No real evidence to confirm the existence of tooth worms was ever discovered, but there are some, who still believe these tiny devils exist, and according to researchers at the University of Maryland Dental School, there are tiny hollow worm-like structures attached to the tubules in a human tooth. Scientists don’t completely understand what they are however they believe ancient people might have mistaken them for worms. 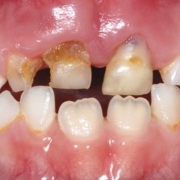